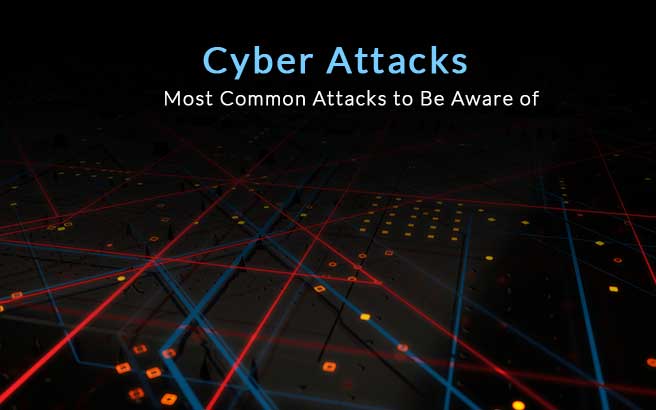 There exists a myriad of cyber attacks but this article focuses on the top 10 most prevalent as outlined below.

Here’s the Most Common Cyber Attacks of 2023:

This type of attack is very common as passwords are the most widely used means of authentication.

A person’s password can be obtained by snooping around their workspace, accessing a password database, “sniffing” their network connection, or outrightly guessing.

A report published by The Times of India on June 6, 2020 shows that this kind of attack is usually traceable to bad password habits such as using the same password for all accounts/logins, and the use of weak passwords1.

Password attacks can also be prevented by implementing multi-factor authentication.

Malware (“MALicioussoftWARE”) is the term used to refer to unwanted software installed on a computer system without the consent of the owner. It can attach itself to useful applications or replicate across the internet.

Types of malware include:

This is a Brute-force attack that works on the cryptographic phenomenon of hash collisions.

It derives its name from the birthday paradox (In a room full of people, what is the probability that two will share the same birthday?).

Birthday attacks are used to verify the integrity of a message, software or digital signature.

A message processed by a hash algorithm results in a unique message digest (MD) whose length is fixed and independent of the original length of the input.

In consonance with the birthday paradox, the birthday attack thrives on the probability that two random messages will generate the same MD when processed by a hash algorithm.

When an attacker is able to generate the same MD as the user, he simply replaces the user’s message with his and goes undetected11.

A drive-by download attack takes place when a user unintentionally downloads malicious code to their computer or mobile device, leaving them vulnerable to cyber-attacks.

This is a very common means of spreading malware.

Cybercriminals plant malicious scripts into the HTTP or PHP code of an insecure website. This script can either install malware directly to the user’s computer on visiting such site, or re-direct the victim to another site that the hackers have control of.

A typical example of a drive-by attack is when you accidentally give consent for an-unwanted software to be installed to your computer, by clicking “next” and “accept” during an installation or while using a website, without properly reading instructions.

This may give the software elevated permission, leading to adverse effects.

A DoS attack overwhelms a system’s resources with more traffic than it can accommodate, preventing it from responding to service requests.

The DDoS attack is also similar to a DoS attack but it is launched from a large number of host machines which are infected by malware controlled by the cyber criminal.

MitM stands for Man-in-the-Middle. This type of attack occurs when a hacker gets in the middle of the communication between client and server. It can take on various forms including

In 2019, an MitM attack was used to steal one million dollars from an Israeli startup by intercepting a wire transfer from a Chinese venture-capital firm intended for the new business4.

This is a type of an injection attack that makes it possible to execute malicious SQL statements, resulting in unauthorized access to sensitive data, such as passwords, credit card details, or personal user information.

SQLi is also used to issue commands to the Operating system in some cases. Websites and web applications that are built with PHP and ASP, as well as those that use dynamic SQL are vulnerable to SQL injection.

In May 2020, it was reported that a hacker in New York along with his gang used SQL injection techniques to hack into vulnerable e-commerce websites and steal credit card information6.

In this type of attack, the attacker runs a script in the victim’s web browser or scriptable application using third-party web resources.

As the victim attempts to access a web page, the page is transmitted with a payload (injected by the attacker and containing malicious JavaScript) as part of the html body.

A recent report by SC Media showed that nearly 1 million WordPress Sites were attacked with the same payload, using XSS10.

Phishing attack is a type of cyber attack that takes place when emails, appearing to be from trusted sources are sent with the aim of obtaining personal information from recipients or influencing them to do something.

Spear Phishing is a peculiar type of phishing where an attacker creates messages that are specifically targeting a particular victim.

The attacker researches properly and composes personalized and relevant messages.

Attackers falsify the “From” section of the email to make it look like it was sent by someone you know. Alternatively, they may clone a website to dupe victims into entering login credentials.

On July 15, 2020 a targeted phone spear phishing attack was launched on some twitter employees in order to mislead them and gain access to the internal systems8.

This type of attack takes place when network traffic is intercepted, enabling the attacker to get a hold of passwords, credit card details or other kinds of confidential user information sent over the network.

Eavesdropping can be done actively (hacker obtains information by disguising himself and sending queries to transmitters) or passively (hacker listens as message is transmitted over the network).

In 2015, owing to a bug in the open source code library AFNetworking, over 25,000 iOS apps were vulnerable to eavesdropping attacks9.

The best way to prevent eavesdropping is data encryption.

In order to defend against an enemy, it is important to understand the enemy and their strategies in the first place.

In this article, we have examined the most common attacks used by cyber-criminals to compromise information systems.

It is imperative that basic measures be put in place in order to guard against these threats.

These include: use of strong passwords, installing reliable antiviruses and regularly updating virus databases, proper firewall configuration and whitelisting, as well as continuous audits of IT systems.