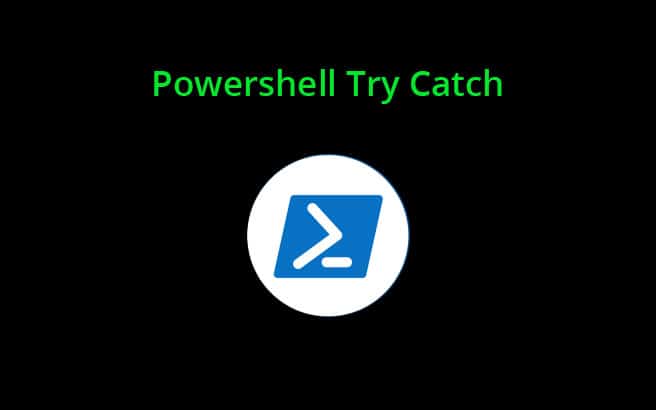 While working on any new PowerShell script, it is always a good idea to include a Try Catch mechanism for error handling.

It may take some additional time, but it will help you prevent the application from crashing.

There are two types of errors:

Error handling mechanism will help in the following ways:

In this tutorial, we will learn how to use Try Cache to establish error handling in PowerShell scrip.

The basic syntax of the PowerShell Try Cache is shown below:

A brief explanation of each syntax is shown below:

The Try, Catch, and Finally statements are used for controlling the script flow when you encounter any errors.

PowerShell is a very expressive language compared to other programming languages.

Only a single line PowerShell code can perform thousands of raw CPU instructions.

Sometimes the executed code may succeed while other times it may fail.

This is where the concept of a Non-Terminating error comes into the picture.

ErrorAction tells the Powershell script or program what action it should take when it encounters an error.

You can use the following options with ErrorAction:

The basic syntax of ErrorAction is shown below:

To understand this better, let’s see the following example:

try
{
Perform some action
}
catch
{
If any error, handle it this way
}
For example,
try
{
$variable = Get:content C:\file.txt:ErrorAction Stop
}
catch
{
write:output "Your specified file not found."
}

In the above example, data from the given file is stored in the variable $variable and if there’s an error, the code gets to the catch block and displays the error message.

Treating All Errors as Terminating

You can also treat all errors as terminating using the ErrorActionPreference variable.

If you want to include it with the script at the following lines at the top of the script:

Next, you will need to create a Try Catch block around the command that causes the error.

Then, you should place a Catch block to handle the error.

This catch block is only accessed once any terminating errors occur.

The whole code should be as shown below:

Try Catch also allows you to access the error record. Generally, all error records are stored in the $_.Exception variable.

It contains very useful information about the error.

The Finally block is the last part of the Try Catch. You can define it after the Catch block and runs every time.

It is very useful when you need to close the resources you opened.

In the above script, we are going to log that a file once read was attempted.

In the above tutorial, we learned how to handle error in PowerShell script with Try Catch.

It is recommended that you write a PowerShell script with Try Catch mechanism so you can easily troubleshoot and fix errors as they come up.

Hopefully you now have the knowledge needed to write your own PowerShell script with Try Catch.

Feel free to ask any questions in the comments section below.