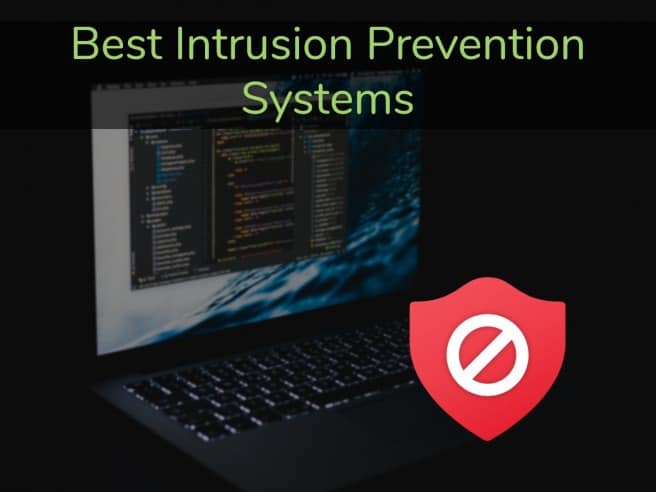 In network security, prevention is much more valuable than mending. While you might be able to fix the damage that an attack caused, it’ll cost you more than to have simply prevented it.

With information ranging from our birthdays to state and business secrets sitting in computer networks, and companies hinging on its constant uptime, it’s important to recognize how crucial cybersecurity is.

Investing in cybersecurity is quite similar to investing in a lock. Sure, if all you’ve got is a TV and a couple of rings, a normal lock will fit you just fine. On the other hand, if you’re keeping 50 gold bars worth of stuff in there, a normal lock is just asking for trouble.

Here’s our list of the eight top Intrusion Prevention systems:

This article will give you an in-depth overview of some of the most prominent tools in a crucial aspect of network security- intrusion prevention.

First we’ll define an IPS(Intrusion prevention system) and compare it to similar technologies like IDS. Finally, we’ll look over 6 different IPS products that can help you begin your next IPS/IDS deployment. If you’re already familiar with the basics of IPSs, then feel free to go immediately to the product comparison.

What is an IPS?

An IPS, or Intrusion Prevention System, is a security system that monitors a network looking for suspicious activity and makes decisions in order to mitigate the damage it caused, or prevent it from ever occurring.

Now, these are more akin to the lock on Fort Knox than a regular lock. Most businesses will find that they need something in between. For a home network, simply running a piece of software on your computer will be enough.

A lot of people consider firewalls to be superior to an IPS. It’s important to note that not only do firewalls and IPS work in different ways, they are also made to resolve different issues.

Firewalls are used to implement rules that’ll stop traffic from occurring based on a set of guidelines. A firewall will help you stop insecure protocols and ensure who has access to what. For example, if you’re facing an issue with the Telnet default port, you’ll use a firewall.

On the other hand, most attacks occur around firewalls, and won’t violate their guidelines.

For example, let’s say a hacker is performing a brute force SSH(Secure Shell) attack. If our servers are configured to accept SSH connections, the firewall won’t do anything. On the other hand, an IPS could analyze the headers and payloads of the hacker’s packets, and halt them. In essence an IPS is used to find, stop, and prevent suspicious behavior that gets around our firewall.

An IPS can be deployed at one of two levels:

An IDS is an Intrusion Detection System. These two cybersecurity measures are often confused for one another. This happens because most products will feature both, and an IPS is essentially just a proactive IDS. The main difference between the two is that an IPS will proactively attempt to stop threats, while the IDS will just detect their existence.

The advantage of an IPS is that it’s great for preventing attacks, while an IDS won’t have a chance of affecting your processes due to a false positive.

The Two Methods Of Threat Detection

An IPS will use one of two methods to detect threats:

Why you need SIEM software

SIEM or Security information and event management products will help you understand your network security data. SIEM software can help you scale your IPS and IDS solutions up and down easier. They also enhance their capability to defend your network, helping you improve reporting, find correlations, and a myriad of other benefits.

In essence, SIEM tools will allow you to create a much more complete security coverage out of your IDS and IPS data.

So, without further ado, let’s get into the top 6 IPS & IDS tools! 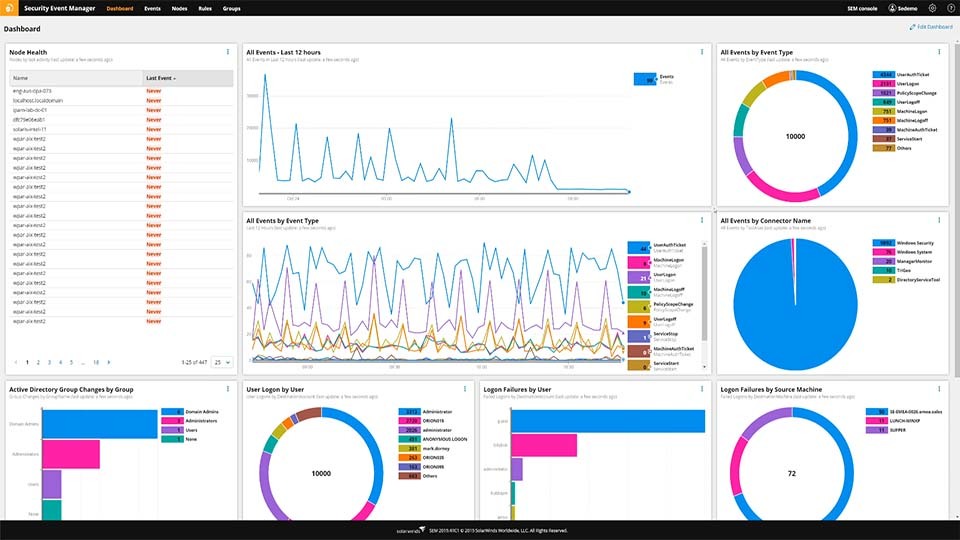 SolarWinds Security Event Manager (SEM) is not exclusively an IPS tool. It is a swiss knife of network security, containing data loss prevention tools, IDS, IPS, etc. It is a virtual program running on a pre-hardened installation of Linux. It can be deployed on a variety of hypervisors including Vmware, vSphere, and Microsoft HyperV.

Furthermore, this IPS solution provides a Snort log analyzer, as well as access to threat intelligence feeds which will greatly help you scale your cybersecurity solutions.

The SolarWinds SEM is supported by Windows servers, and it will compile according to a variety of different standards including HIPAA, SOX, and PCI DSS. In case you’re on the fence about trying it out, there’s a free 30-day trial!

ManageEngine Log360 performs data protection and security standards compliance through several strands, which include a SIEM for intrusion detection. The SIEM mines log information and so the Log360 package also includes a log manager that collects, consolidates, and files log messages from operating systems and more than 700 applications.

The software for Log360 installs on Windows Server. There is a free version, but it is better to get the 30-day free trial of the Premium edition. 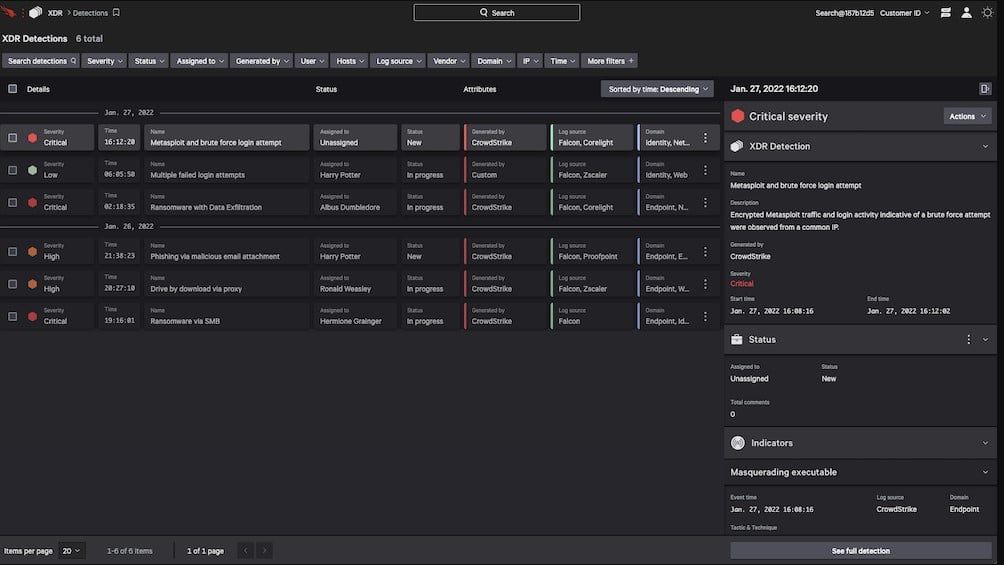 CrowdStrike Falcon XDR is an anomaly-based detection system that can be enhanced by indicators of compromise (IoC) from a threat intelligence feed. The system interacts with another product in the Falcon product family, called Falcon Prevent to gather activity data from endpoints. The service also interacts with third-party security tools through a mechanism called security orchestration, automation, and response to extract activity data and to send back response instructions.

CrowdStrike Falcon XDR is a cloud-based system. It works in conjunction with Falcon Prevent, which is available for Windows, macOS, and Linux. You can get Falcon Prevent on a 15-day free trial.

Security Onion itself is an operating system, being a Linux distro that doubles as a quality security solution. Once again, it is not simply just an IDS/IPS, it features a variety of other security features. It uses OSSEC for its host-based IPS and Suricata and SNORT to handle network-based IPS.

As a Linux distro in and of itself, Security Onion only supports itself. You can get it for free here! 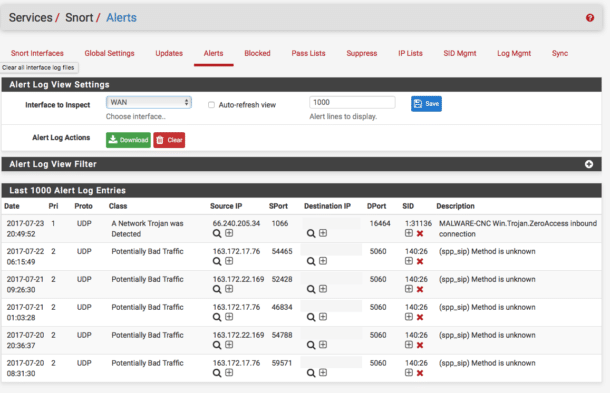 Created in 1998, SNORT is one of the oldest cybersecurity solutions on this list. It is one of the most popular open-source IPS’ with a huge community around it. This means that if you’re having trouble with it, you’ll be able to easily find tons of others that have had and solved similar issues.

Its Sniffer Mode is designed to work as a packet sniffer, and together with its Packet Logger Mode you’ve got an excellent network traffic logging tool.

One of SNORT’s biggest downsides is its UI, which isn’t very intuitive nor pleasant on the eyes.

SNORT uses a mostly signature-based approach to IPS/IDS. While it comes with an array of in-built policies, you can also add your own. If you aren’t feeling quite brave enough to do this on your own, the large community has a variety of suggestions.

While SNORT isn’t ideal for enterprise-sized organizations, it is capable of securing them. This is more than can be said for almost any free tool out there, earning it a spot on this list. Even some enterprise-grade hardware IPS solutions such as the Cisco 4000 Series Integrated Services Routers use this software for their IPS/IDS.

The IDS/IPS functionalities of SNORT are mostly signature-based. SNORT comes with a set of base policies, but you can also write your own. While this may seem intimidating at first, the large community makes things a lot easier and helps contribute to a robust set of knowledge and rulesets available for SNORT.

As a bonus, if you are looking to get started working with a free IPS software that will have value even in enterprise applications, consider getting familiar with SNORT. Enterprise devices like Cisco’s 4000 Series Integrated Services Routers use SNORT for IPS and IDS. 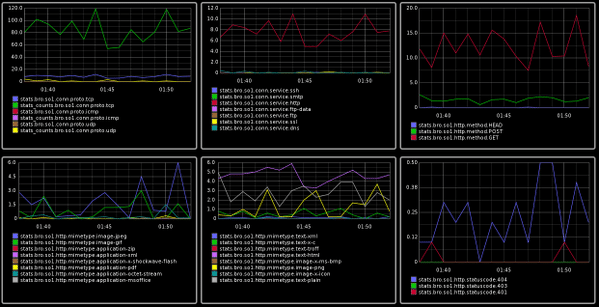 The Zeek(formerly Bro) security monitor provides you with an expansive network analysis framework which also contains network-based IDS/IPS. Due to being developed by scientists, Zeek is mainly used in scientific, open-source, and supercomputing areas. It has been sponsored by names such as the National Science Foundation and Mozilla.

Zeek subscribes to a mostly signature-based method of detection, however, that is nowhere near the end of its capabilities. It features behavioral analysis as well as passive monitoring, anomaly-based detection and a variety of other features.

Zeek’s biggest flaw in our eyes is its design. While it is relatively easy to use once you’re used to it, it’s not very intuitive and looks underwhelming. 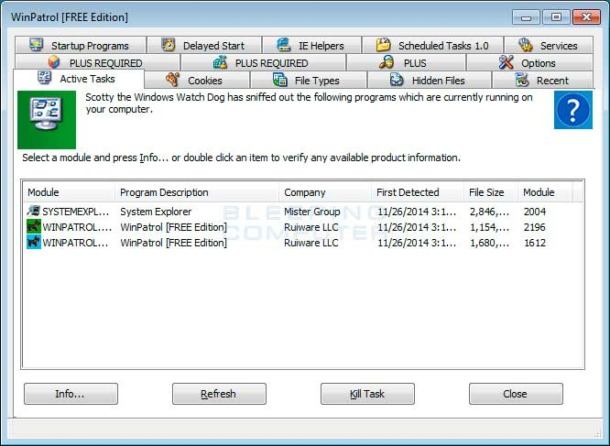 WinPatrol is the only Windows host-based IPS solution. If you came to this list searching for an IPS/IDS to find a solution that can protect a Windows host from suspicious activity, then this is one of the better entries for you.

WinPatrol can also do a variety of other things such as monitor file type association changes, registry changes, etc.

With that being said, WinPatrol is known for having many false positives, as well as experiencing the occasional odd crash. 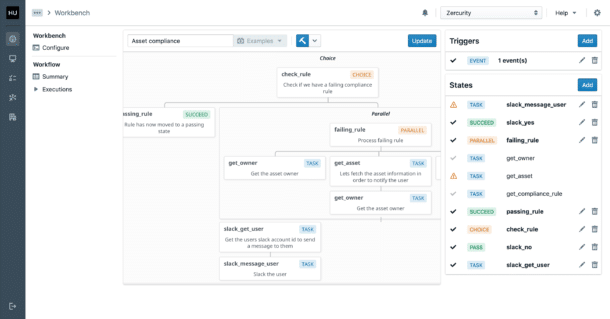 Osquery is an IPS/IDS made by Facebook. Its main defining feature is its unique approach to detecting malicious activity. The program uses extremely basic SQL commands in order to take a snapshot of your data.

Now, this might seem like an unnecessary and trivial function, however, even their homepage lists an example of how you could use that to find a process running without its original binary on the same HDD.

Naturally, this function can be customized as you see fit to fit right into your network.

The fact it’s supported by Facebook, one of the fastest-growing companies today, means that it’s likely Osquery will improve by leaps and bounds from where it is today. But if you need an extremely lightweight, free, and unique IPS, this is the one for you.

No network security setup is complete without an IPS/IDS.

Although IPS and IDS are extremely important to network security, you can’t expect them to handle all possible threats. To return to the lock analogy, it doesn’t matter how strong your lock is if the burglars come through the window. There are methods of intrusion which don’t involve stealing passwords or breaking encryption.

One of the most common methods of gaining entry is social manipulation of employees. You need to educate members of your staff about how to control what information goes to whom. Education of staff is half of prevention in itself. It’s also important to use interactive ID methods for employees, as staff may be tricked by a fake email or phone call from a hacker pretending to be their manager.

There’s also a variety of other measures that one can take in order to protect their company’s digital presence. For example, you could include document access controls which won’t let certain pieces of data be printed, emailed, or changed in any way.

It also isn’t a bad idea to shield your wifi to stop anyone from gaining entry into your network through your wifi connection. The main takeaway is that all of us need to be getting more and more creative with our prevention methods.

This is because attackers are becoming more and more sophisticated, and striking at angles we didn’t know existed before.

Did we miss your favorite intrusion prevention system? Was there a factor we overlooked? Write to us in the comments!