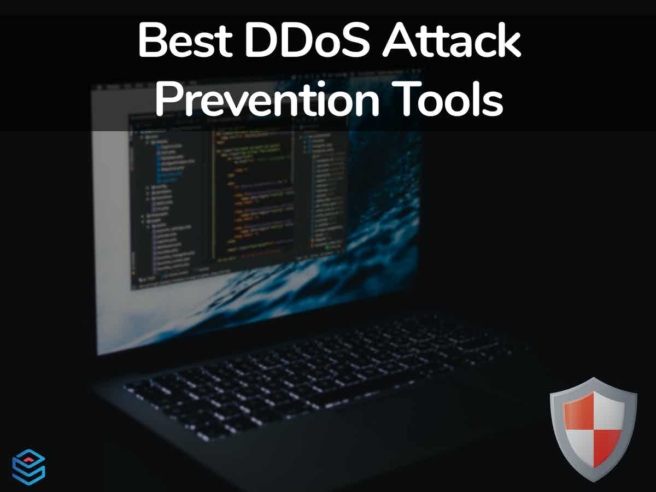 DDoS or Distributed Denial of Service refers to a kind of cyberattack that focuses on amassing enough requests to a target server so that it shuts down. They are one of the biggest threats that enterprises and SMBs face today. DDoS attacks are by far the most common form of cyberattack, almost tripling in frequency in the last three years.

Cyberattacks are no longer a threat that focuses on just the largest enterprises out there. Instead, small and medium businesses are often targeted, as they’re likely to have fewer layers of protection set up.

Today, we’ll be going over the best tools for DDoS attack prevention; these automated tools make defending against DDoS attacks much more accessible and will do wonders to dissuade them from happening in the first place.

Here is our list of the best DDoS protection tools on the market:

What To Look For In A DDoS Prevention Tool

DDoS prevention tools are made to stop malicious traffic from getting to your network. Each tool is different in approaching these attacks because there are various kinds of DDoS attacks out there.

The main criteria we used for evaluating the best DDoS prevention tools are: 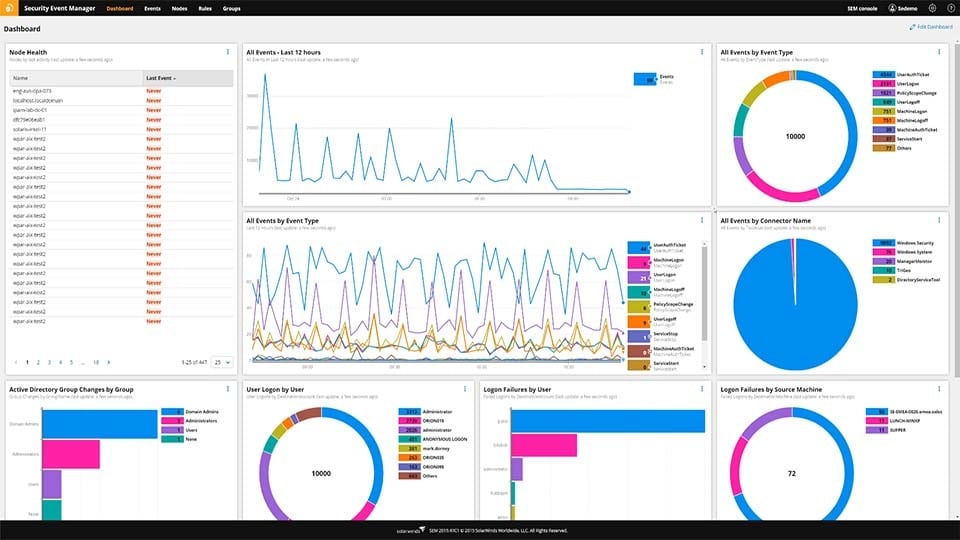 The SolarWinds Security Event Manager is a DDoS protection software that features event log monitoring capabilities. When it comes to detecting DDoS attacks or other malicious activities, having an event log can come in as a handy feature.

The tool has a list of known malicious actors, which helps the tool automatically block out available malicious IPs from dealing with your network. In addition, the list is updated very often, being community-sourced, which means that you’ll stay protected even from very recent threats.

It features an excellent alerts system you can customize to your liking so that you’re notified whenever a malicious agent might be meddling with your traffic. This lets you point your technician’s efforts away from constantly monitoring dashboards.

The logs kept by the tool are excellent for mitigating the impact a DDoS attack has on your network, as well as for performing retrospective analysis when an attack has already occurred. The logs are presented in a very intuitive manner, and you can sort through them by a variety of factors, such as time, IP, account, etc.

With that being said, the SolarWinds is quite a complex tool and is mainly designed for more extensive networks, meaning it might take some time to get to grips with some of its features.

The Solarwinds SEM has a starting price of $4,655 and comes with a 30-day free trial. 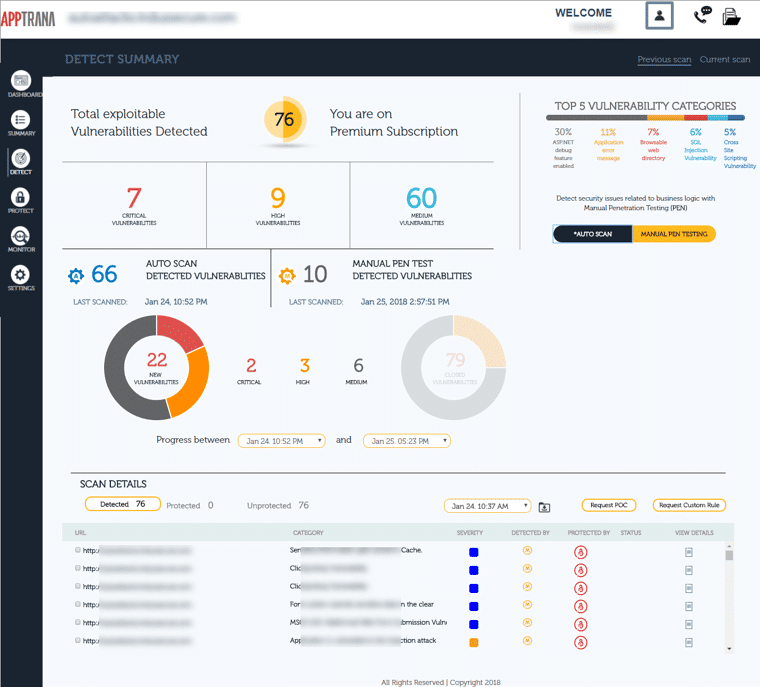 Indusface AppTrana is a WAF, DDoS, and Bot mitigation software. Its edge service bundle comes together with a patching service, Web Application Firewall, and vulnerability scanners.

The AppTrana is also excellent at absorbing volumetric attacks, with one of its main standout features being just how good it is at separating DDoS traffic and regular user traffic.

This tool utilizes its extensive database to set up rules and alert conditions for each website. It performs constant monitoring and detects botnets automatically, blocking their IPs to prevent the botnet from meddling with your websites. There’s also a built-in AWS to help you deal with layer three attacks.

AppTrana’s vulnerability scanner works by referencing OWASP’s top 10 threats, as well as the SANS 25 Vulnerability list. If it finds any vulnerabilities that fall into one of these two, it will automatically issue a patch to help with it. Furthermore, the tool has an SSL offloader and a content delivery network to help you accelerate your site’s performance.

The AppTrana comes in two different editions, with the above being contained in the Advance version, priced at $99 per protected application each month. Its Premium version is a managed website security tool and has a variety of other peripheral services such as assistance from security analysts and attack mitigation planning. This plan is priced at $399 for a protected application each month.

The main weakness of this software is that its enterprise-level options are relatively limited. In addition, its trial period is a bit short, as it lasts for just 14 days, which might not give you enough time to assess the tool thoroughly. 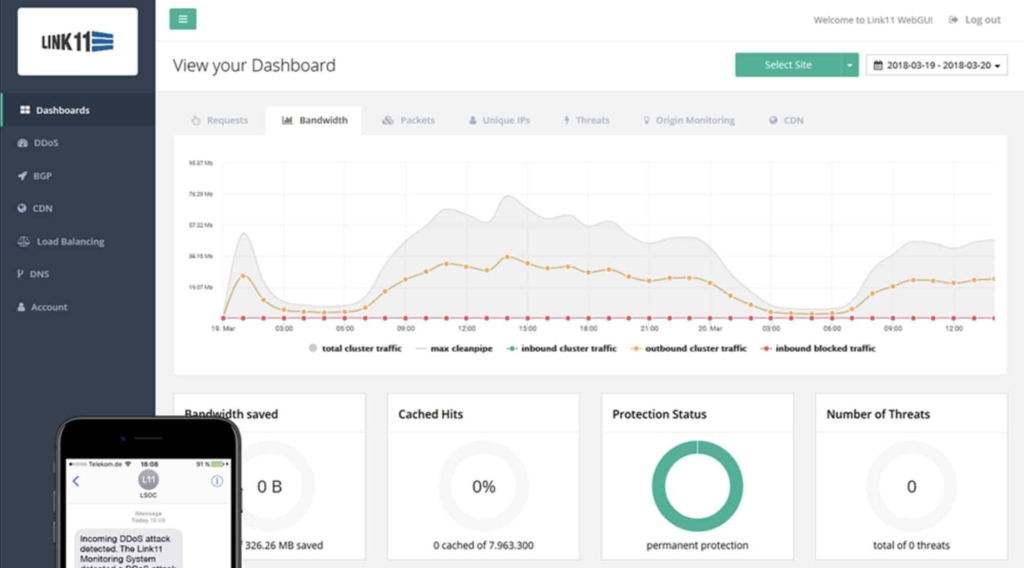 Link11 is a cloud-based DDoS protection software capable of detecting and mitigating DDoS attacks in layers 3-7 on a real-time basis. In addition, it features an innovative, AI-based approach to attack detection.

The Tool’s AI looks at the sequences of well-known attack patterns and compares those sequences to your live traffic. If there’s a connection to your website acting similarly, the tool will immediately alert you via SMS when it detects a threat.

As a cloud-based tool, Link11 has straightforward deployment. You can have it up and running in a matter of minutes. In addition, its dashboard lets you look at an overall presentation of your traffic and application performance. For how powerful the tool is, it’s straightforward to use.

Link11 features reporting capabilities to create reports on security events to share with your team. You can generate these reports automatically or create them manually when you need them.

With that being said, the tool is ill-suited for smaller businesses, as it’s relatively complex, and the AI can get a bit confused with the ebbs and flows of a smaller company. 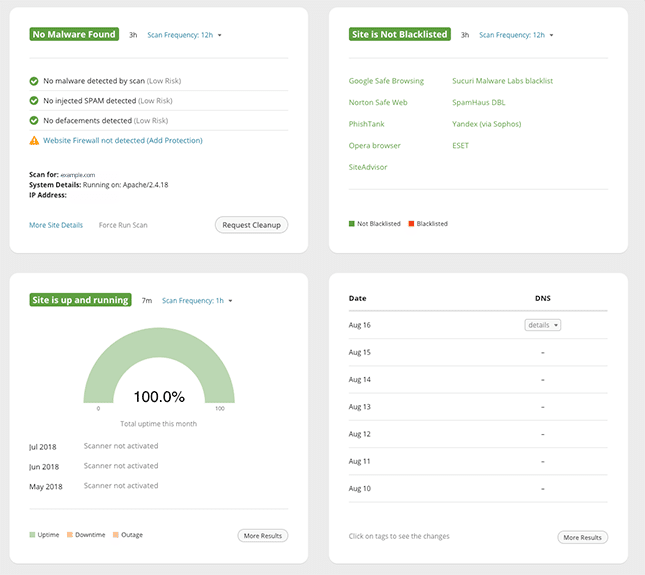 The Sucuri Website Firewall has DDoS attacks, and zero-day exploit prevention features. This tool looks at all of your HTTP and HTTPS traffic to stop malicious agents from getting to your site.

The tool uses geo-blocking to help you with blocking out DDoS traffic. This feature lets you completely stop traffic from the three countries with the most DDoS attacks. You can also whitelist specific IPs to help you communicate with your team or genuine visitors without blocking them.

As a website firewall, the Sucuri is relatively cheap compared to most dedicated tools on this list. Its Basic version starts at just $9.99 a month, with the Pro version coming with SSL certificate support and starting at $19.98. Finally, its business edition comes with additional features and sits at $69.93.

With that being said, it doesn’t offer quite the raw power of the above two entries in this list. You can also only get VIP support with the Business edition. However, it’s excellent for a relatively low investment method of DDoS protection. 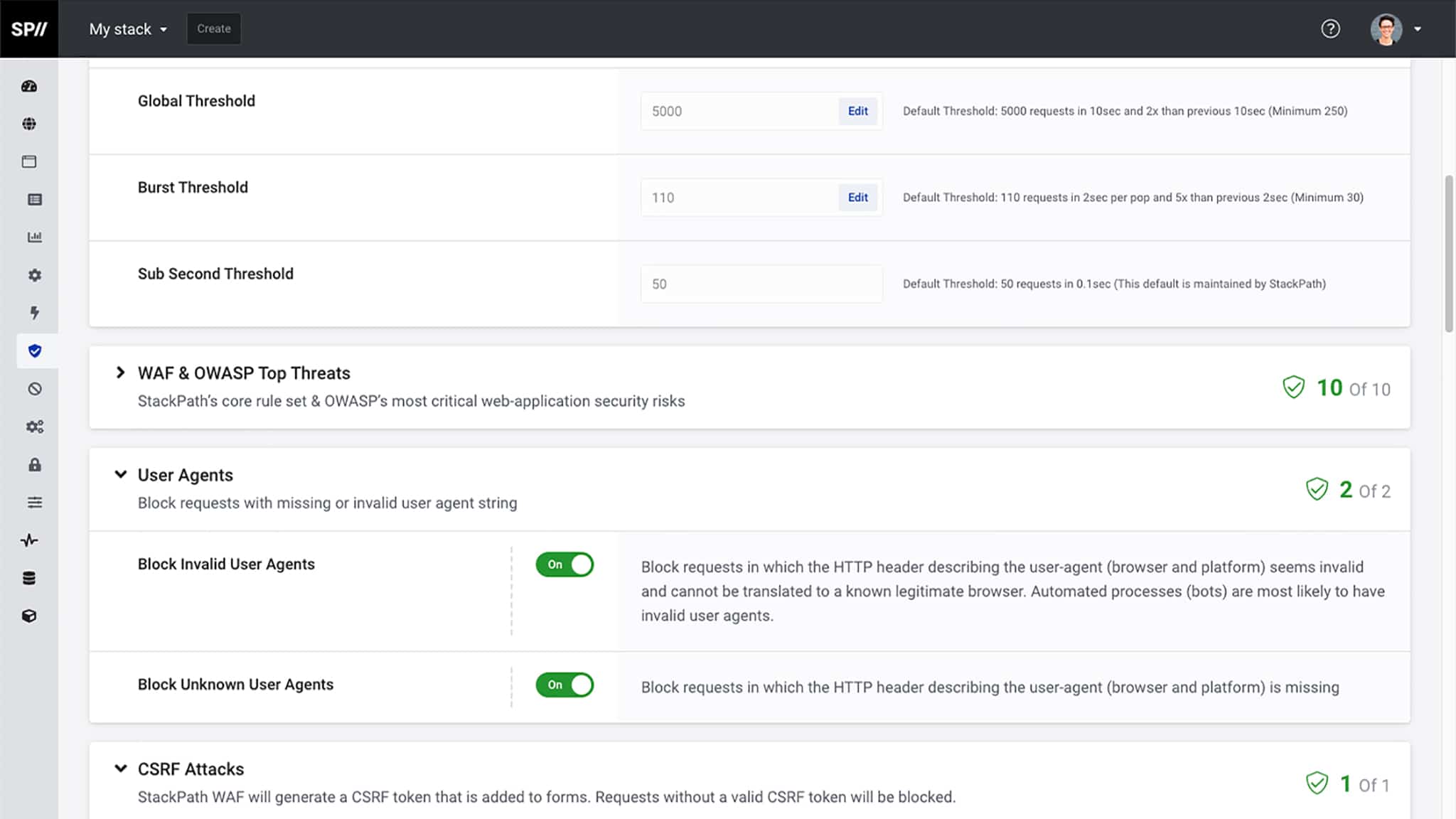 StackPath is a DDoS protection tool and a WAP giving you layer 3, 4, and 7 protection. Layer seven protection uses behavioral algorithms to find and stop volumetric attacks. Its mitigation facilities can deal with HTTP, UDP, SYN flood, and other joint attack vectors.

To combat more significant attacks, the tool uses its capacity of 65Tbps to alleviate them. Since its capacity is larger than the most critical recorded DDoS attack, this feature is handy. The tool can also use its vast network of edge locations to block attacks from anywhere on the globe.

To help protect your websites, you can use its WAP to set up DDoS thresholds. This lets you dictate when the tool’s DDoS protection engine will react to a perceived attack. You can set up both burst and domain thresholds simply by setting several requests that you aren’t equipped to handle.

The tool is priced on a per-package basis. For example, its CDN package starts at $10 a month and gives you network-layer protection, and its WAF package is priced at the same amount, providing network and application layer protection. 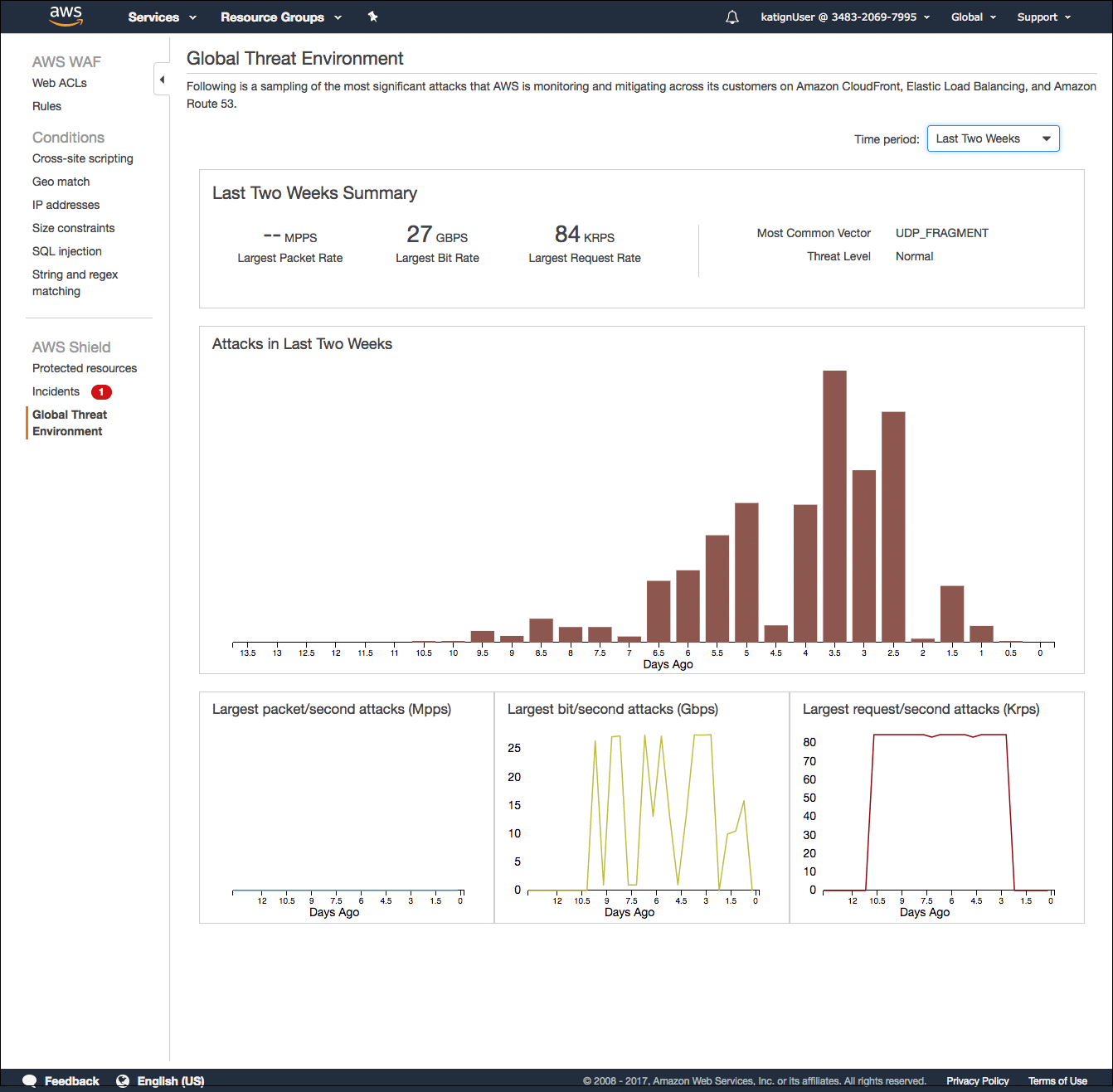 The AWS Shield is a managed DDoS protection software using flow monitoring to analyze the traffic coming into your websites. The tool finds suspicious traffic in real-time by looking at the flow data. Furthermore, it has features like packet filtering and traffic prioritization to help you control the incoming traffic.

The tool was made for AWS cloud environments, giving it a limited but specialized scope. It lets you write rules for the AWS WAF to help you defend yourself from application-layer DDoS attacks. There’s also an Advanced version of the tool that offers additional features. In case you’re stuck with a more complicated attack, there’s a dedicated response team that’s willing to help you.

The AWS Shield Standard is entirely free, with the Advanced version costing a variable amount; you can request a quote on their website.

With that being said, the AWS Shield is quite complicated to set up and requires you to have a technician knowledgeable on the AWS architecture.

Cloudflare is a DDoS protection software with a high network capacity of 30Tbps, significantly higher than even the most significant DDoS attacks. The tool mainly relies on its extensive IP reputation database, which lets it block out malicious IPs from over 20 million locations.

Cloudflare was designed with various DDoS and data breach attacks in mind. High request rates are combatted with rate limiting, while the tool uses CDN(Content Delivery Network) to ensure the network stays available.

Cloudflare has four different editions. Their Free version has the essentials for individuals or smaller businesses. Its Pro version costs $20 and has a WAP made for professional sites and blogs/portfolios. Their Business version has $200 a month, lets you set up customized WAF rules, and ensures a 100% uptime SLA. Finally, its Enterprise version is priced on a per-business basis and has a named solution engineer included with the product.

There are four different versions of Cloudflare; Free, Pro, Business, and Enterprise. The Free version doesn’t cost anchoring for individuals with a personal website. The Pro version costs $20 (£16) per month with a Web Application Firewall designed for professional websites, blogs, and portfolios.

With that being said, Cloudflare lacks some of the more complex features of other tools and has quite a complicated setup process. 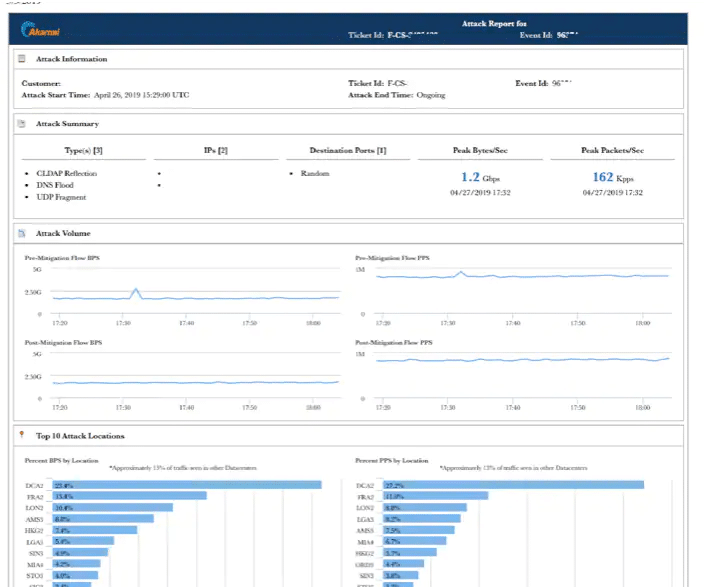 Akamai Prolexic Routed is another managed DDoS security tool. The tool features zero-second mitigation, which can help deal with threats from the moment they’re spotted. They also feature an excellent, 24/7 Security Operations Center you can contact to provide you with more detailed support in case of an attack.

The tool also provides network traffic monitoring, which can be a great help in finding attacks early. You can look through all of your traffic data in real-time. It also features an 8 Tbps bandwidth, coupled with 19 different scrubbing centers set up worldwide.

While the tool is all-around excellent, many of its features aren’t very useful for SMBs. Furthermore, there’s no way to get insight into the tool’s pricing without directly contacting their team, making it harder to compare.

As always, the best DDoS attack prevention tool will depend on your needs. Our number 3 pick might be your number 1; however, we’ve focused on looking at the tools in a white-room situation, focusing on versatility. There’s essentially no way to go wrong with picking any of the top picks, as they’re set up to be excellent no matter your situation.

With that being said, constantly evaluate what you need and what funds you have available before committing to a purchase. All of the picks on this list have a free trial available, so take advantage of it. That will let you know the ins and outs of a tool before you commit to purchasing it.

What is your favorite DDoS attack prevention tool?

What feature do you wish more tools had?