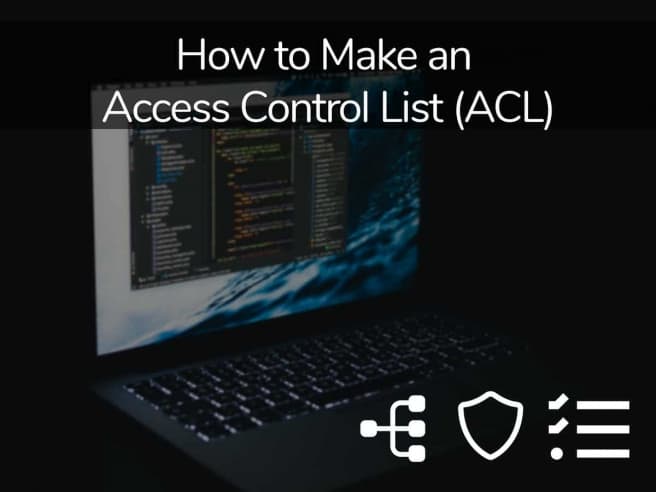 An ACL or Access Control List is one of the most crucial parts of network security. In essence, an ACL is a function that pays attention to all traffic coming and going out of your network and then compares it to a variety of defined statements.

This article will delve into how ACL’s work, as well as answer some frequently asked questions about access control lists.

What Defines An ACL?

ACLs are, at the bare-bones level, filters used to control the traffic coming into and going out of your network. Any ACL will work using a group of rules that tell it how and if to block or allow packets. Although this sounds quite simple, they can get quite complex when delved into more deeply.

You can think of an access control list much in the same way as you would a Stateless Firewall, a tool used to forward, restrict, or block a given packet going from its origin to its destination.

When you set up an access control list on a router for an interface, then every instance of traffic will have itself compared to the statements given to the ACL, letting it block it if it doesn’t meet the standards, or forward it if it does.

There’s a lot of flexibility when defining the rules an access control list follows, whether this is the destination, following a certain protocol, or something else.ACLs are commonly found within routers and firewalls, however, you can set up an ACL on pretty much any device running in your network ranging from hosts to servers, network devices, and others.

Why You Should Use An ACL

The general purpose of an ACL is to give your network an added layer of security. If you don’t have one, then any kind of traffic can enter and leave your network, which can leave it vulnerable to more malicious kinds of traffic.

In order to boost your network security through the use of an ACL, you can do things like deny certain routing updates or stop certain IP addresses from accessing your network. Another benefit is that denying certain kinds of traffic doesn’t lead to all traffic being stopped. For example, if you deny traffic from a certain IP, users not sharing that IP won’t notice anything changing. This can also be grouped, so you can filter multiple addresses at once, as well as filter through a variety of protocols.

So, if someone in the engineering department absolutely needs to access some files in the financial department, rather than unblocking the whole department and leaving yourself vulnerable to potential misuse of that privilege, you can only allow a specific port instead.

Other benefits of having an ACL include:

With that being said, with a tool as flexible as an ACL, the sky is the limit for the usages you can come up with.

Where Should I Put The ACL?

If you’ve got devices in your network experiencing traffic from unknown external networks (a great example of this is the internet,) then the ideal place to set up your ACL will be along with the edge routers.

You can easily set up a routing device that uses access control lists in order to separate public internet traffic, and the traffic internal to your private network. However, this generally includes the use of a DMZ or De-Militarized Zone.

This DMZ will be reserved for those servers needing access from outside of your network like the servers of apps, DNS, VPNs, and even the internet itself. It’s also possible to set an ACL up so that it protects you against certain well-known ports such as UDP and TCP.

You can do things like setting up a router in your network in between the DMZ and Trusted Zone in order to set up more restrictive rules to shield your network. However, this is generally suboptimal, as a stateful firewall will generally do a more efficient job than an ACL would. However, there are some situations where the ACL edges out.

Why Put An ACL Instead of a Stateful Firewall to Protect A DMZ?

The benefit of an ACL here is the fact that it’s configured directly into the chosen device’s forwarding hardware, meaning the end performance will stay the same.

Sometimes, a stateful firewall can also be detrimental to the overall performance of your network. Picking an ACL can be better when it’s being used to protect high-performance assets like servers and apps. Although an ACL doesn’t provide quite the same security as a stateful firewall, they represent a great solution for parts of the network that can’t suffer the decrease in speed that a stateful firewall would bring.

The Makeup Of An ACL

Most newer platforms will implement ACLs similarly to one another, and they usually come with guidelines to make setting up an ACL easier. It’s crucial to keep in mind that an ACL is simply a group of entries and rules mixed together. An ACL can have as many entries as you’d like, regardless of what they’re supposed to do.

However, there’s some information you’ll need to help actually define an access control list entry. Those are:

How Many Kinds of ACL Are There?

There are five different kinds of ACLs, and each of them fits a different niche and purpose within a network. These are the standard, dynamic, reflexive, and time-based access control lists.

So, what are the differences between them?

This kind of ACL is often implemented when companies want to stop their employees from spending their time online during work hours, but still want to allow them to access the net during their lunchtime.

How To Set Up An ACL On A Router

It’s crucial to have an understanding of incoming and outbound traffic (or ingress and egress traffic) in order to have a seamless ACL setup. Ingress (inbound) traffic is defined as the traffic coming in from an internal or external network into the router. Egress traffic refers to the opposite, it’s the traffic going outside into a network.

When you’re determining the rules that your ACL will follow, keep in mind that the flow of traffic is determined by the router’s point of view.

In order to get your ACL working, you’ll need to apply it to a router interface. Due to the fact that all denying or allowing decisions are done through the router’s own hardware, whatever statements you set up will be put into place far quicker.

When you make the entry for an ACL, the first thing you need to input is its source address, with the destination coming after it.

How Do You Define A Source When Wanting To Block Online Traffic?

Given the fact that ingress traffic comes to your network from the outside and into the router’s interface, the source in this scenario is either an IP from the net, or it’ll be everything, annotated by a wildcard mask of 0.0.0.0, with its destination being an internal IP.

What About Blocking A Host From Connecting To The Internet

Ingress traffic comes from your network to the router’s interface and goes out into the internet in this example. This means that the source IP will be the host’s IP and the endpoint being the internet IP address.

ALCs are sets of rules designed to pick and choose which traffic you’d like to allow in or out of your network, and which you’d like to deny.

ACLs let you restrict, allow, or reject traffic, making them a must-have security element. The importance of the ability to control packets coming in or going out depending on their IP, protocol information used, or other factors cannot be overstated.

With that being said, it’s important that you know what you’re doing when setting up an ACL, as putting it in the wrong place, or switching the source and destination can be quite detrimental to your network. One wrong ACL statement could mean your whole enterprise is left without internet access.

In order to avoid consequences like these, you’ll need to have a good grasp over inbound and outbound traffic flows, as well as the inner workings of ACLs. Keep in mind that the router handles traffic to make sure it goes through the correct interface and that packets can either be ingress (inbound) or egress (outbound.)

While a stateful firewall can often give you more security than an ACL can, it can cause performance issues with the network; however, an ACL uses a lot fewer resources, using the router’s hardware in order to process statements. This gives you more efficient performance, while not sacrificing security.