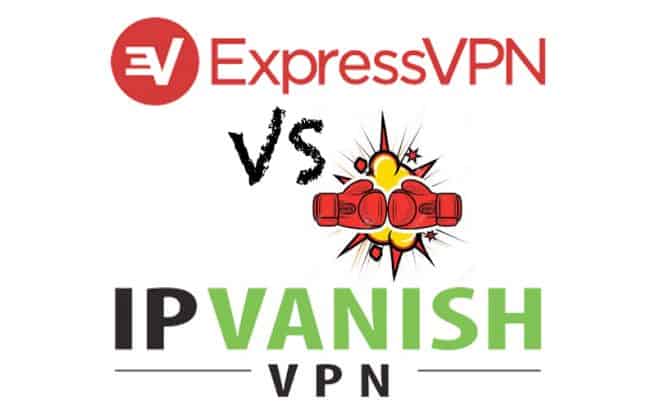 We at WebServerTalk have been big fans of ExpressVPN for many years now. It’s even been ranked number one in our “Best 9 Best VPN Services” article!

Our being impressed with its performance led us to taking the 2019 version to a deep testing to make sure that we get into every detail of the software client for every major OS that works on desktop and mobile devices.

We only have but appreciation and positive things to say about its usability, security, and the overall feature set, and the only thing that might hinder others from getting it is the price.

But when it comes to performance, IPVanish isn’t lagging behind.

With a price tag that is lower than that of ExpressVPN but still being able to provide an awesome user interface along with a good set of features, we think that this underdog can take on the king head to head.

Both VPN providers have a decent set of features and both are able to help you connect to the Internet using a secure and fortified tunnel.

This round will get outside of each VPNs “namesake” and discuss the additional offering that sets it apart from the rest.

ExpressVPN packs a good set of features without overdoing the interface in each of the client version that it has.

It appears like it only wants you to be connected and enjoy safe browsing, especially at first glance.

But going deeper reveals features that can help measure your connection’s performance and choosing the traffic that passes through the secure tunnel.

Here are the features that it has: 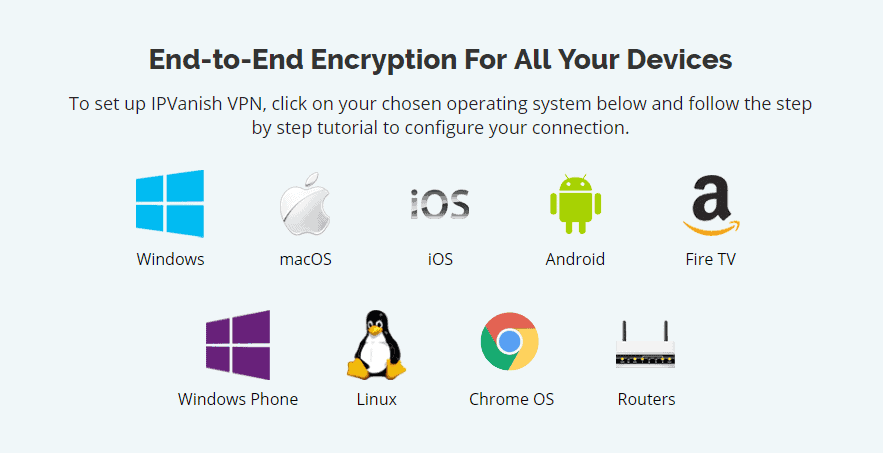 IPVanish will not just give up the fight in this first round that has to do with the available features.

We’re just sad to inform you that the IP cycling feature which has been a favorite by some can no longer be configured from the interface.

We just noticed that there was actually a way to change how often the cycling occurs and it can also be disabled.

But there are other notable features to mention!

Here are some other features that IPVanish has:

ROUND 2: Ease of Use

The second round has to do with the features of each VPN.

It will discuss how great the VPN service is when it comes to the overall user interface design.

This is an important aspect as users will mostly choose a VPN that looks friendly and less intimidating in every available software platform where it can run on.

If you want to connect to the Internet through ExpressVPN, the user interface is going to give you a large “On” button which is highlighted on the back section by a shield figure.

This button is going to appear green when you are connected. 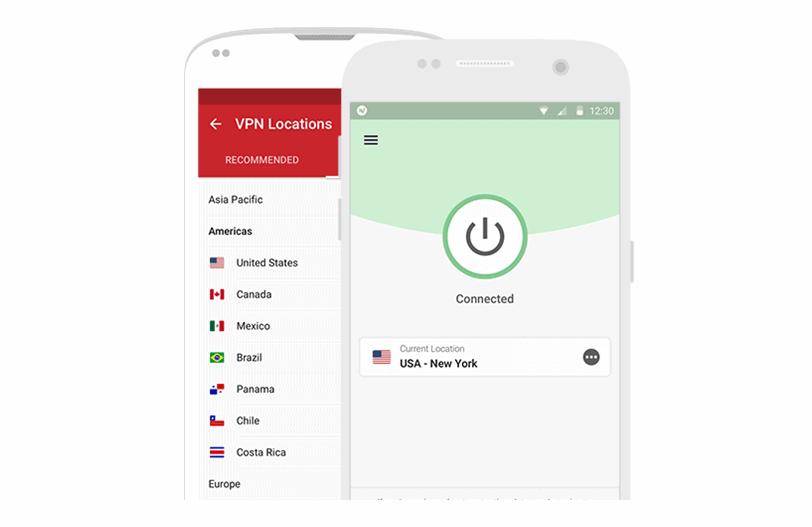 Choosing a server to connect to is also made easy by the “choose location” button that opens in a new window showing the list of servers that ExpressVPN has.

We recommend that you do this after performing a speed test on your chosen location.

It’s easy to find a server to connect to using the Search feature and ExpressVPN has made sure that there are filters that will help narrow down the search.

There are not many options in the interface but ExpressVPN’s strength is found within the “Settings” menu that can be accessed by clicking on the “three-dash” button that is found at the top-left portion of the interface then hitting the item that says “Options”.

There are five tabs under this section which are mostly self-explanatory. In here, you can choose how the service behaves when your device starts up, enable or disable kill switch or fire up split tunneling.

From here, it’s only the “Browsers” tab that we find important because it gives away links for downloading Firefox, Safari, and Chrome extensions.

Ease of use isn’t an issue with IPVanish but it has more options that can be accessed right on its face compared to ExpressVPN.

It brings users to the “Quick Connect” tab upon launching and in here, recommended servers will show relevant information like the protocol and IP address.

A graph that illustrates the speed is what takes most of the screen making the “ON” button a bit hard to spot but it is located at the top-right corner as shown below. 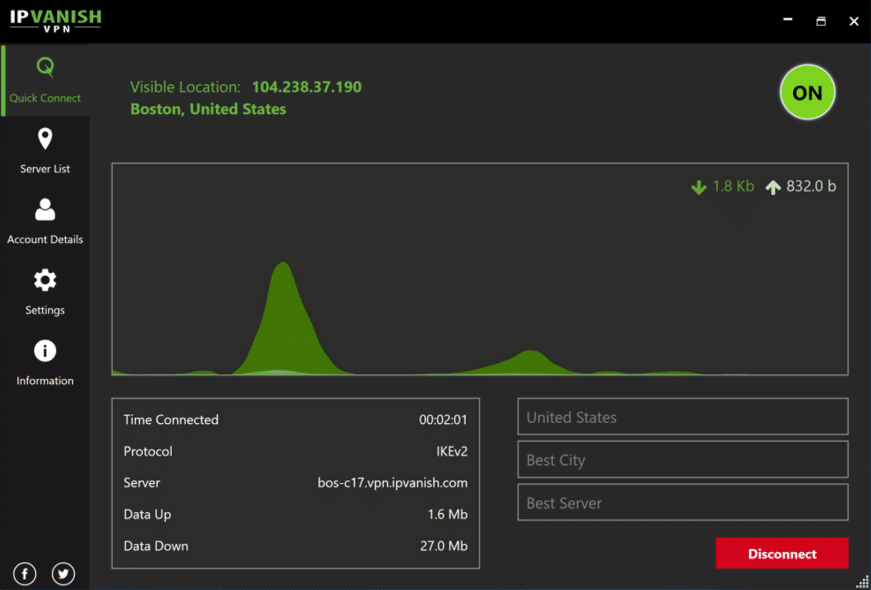 Just like ExpressVPN, the list of recommended servers is useful but it does not show the best ones all the time so you will need to use the tab that is labeled “server list” in order to manually pick the best one.

You can select a server manually either by using the search feature or by scrolling. A map where you can pick a server location is also available.

Specific data centers are not available though so, for instance, you want to connect to Amsterdam which has over 100 servers, you can only connect to the country as a whole and not to a specific server out of the 100+ that are available.

That can have some advantages and disadvantages to itself.

For instance, it’s a great feature if you don’t want to mess around with the specific settings but isn’t good for more advanced users.

To fix this issue, there’s the “Quick Connection” settings tab where you can do your thing.

The “Settings” section is also straightforward and this is where tweaks to the protocol, kill switch, IP verification and configuration of the customer DNS can be found.

Price is another factor that can bring a VPN to the top or the bottom of any comparison but it’s also important to try to weigh this with the features that a certain brand offers.

Meaning, a focus on value should be added as another dimension on this round.

A more expensive provider doesn’t always mean that it offers great value while a cheaper one doesn’t mean it automatically loses the round.

Let’s see which VPN provider wins in round 3!

Being the best VPN doesn’t mean that it no longer has any weakness.

For ExpressVPN, it’s the price that makes it less appealing than the other VPN providers out there like IPVanish, for instance.

The rates are not that terrible but they are higher than what other VPNs offer.

We are not impressed with the number of supported users either. The price rates for ExpressVPN are as follows:

Just like any other VPN provider, the $13 monthly plan for ExpressVPN is a bad one. And it is the most expensive out there.

NordVPN offers access to twice as many devices but for a dollar cheaper price though it is much slower in terms of speed.

But the quality of service that you’ll get is also high along with the array of security features that it has.

Go for a cheaper service like PureVPN and you will actually save money while compromising on security.

The semi-annual, and annual subscriptions offer more value as it cuts up to $2 off from the regular monthly price but at $99 for ExpressVPN, it’s still expensive compared to the same cost for CyberGhost that will get you almost 2 years access for 7 simultaneous users.

IPVanish has better pricing and it’s on the level of the other VPN service providers out there.

It has a different line up compared to ExpressVPN. There’s a monthly plan, a three-month plan, and an annual plan which all support 10 simultaneous devices.

The monthly rate is $3 cheaper than ExpressVPN’s and it’s quite impressive considering that it offers support for a triple as much devices.

We’re not really impressed with the 3-month plan as we think that a six-month one that costs $50 would be a better value with 1 month of free access computing from the regular rate.

ExpressVPN has a 30-day money-back guarantee while IPVanish only has 7-days.

Our next round will focus on what VPNs are mainly used for, privacy and security.

They’re designed for protection against the prying eyes of different ISPs (Internet Service Providers) and even certain agencies of the government. This means that your information is also hidden from the VPN provider.

In this round, we’re going to put our focus on the types of encryption used, the protocols and also the Privacy Policy. 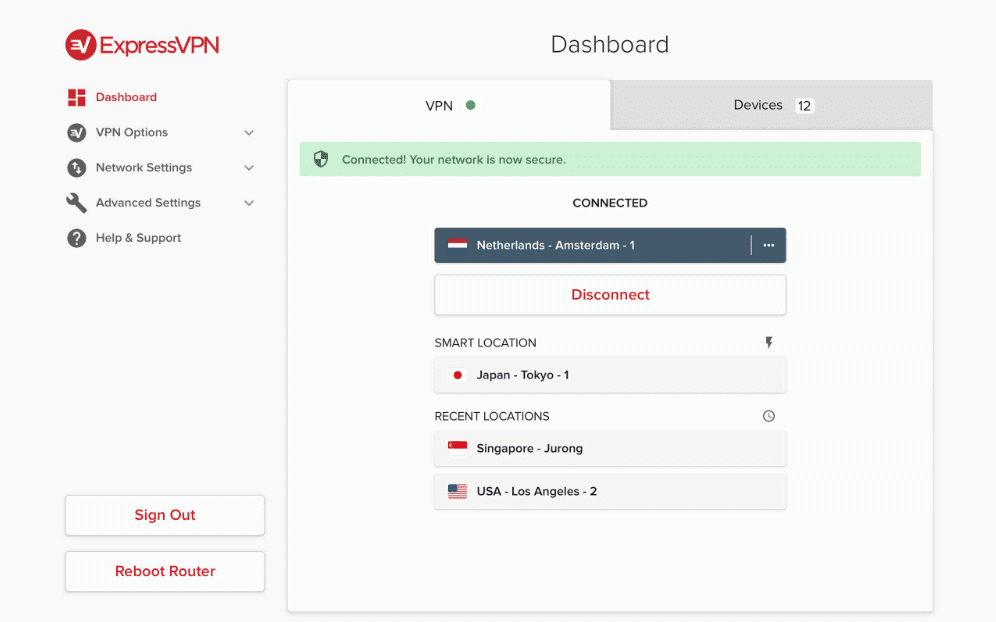 With AES 256-bit encryption that works hand-in-hand with the OpenVPN protocol to offer protection on your usage traffic, ExpressVPN is one of the best in the industry in terms of security.

There is even an option to use 4096-bit RSA key and that’s already enough to break through China’s Great Firewall.

Having OpenVPN also means that it’s possible to change different aspects of security by changing or downloading a variety of configuration files.

There are other protocols that are being offered including SSTP, PPTP, and L2TP/IPSec.

All of them offer sub-optimal security in desktop computing environments. The security is also on the top level and the Privacy Policy is exceptional. There is no logging of your traffic even on a temporary basis.

They’ve existed for over 11 years and this has not been proven false.

Maybe that’s because of the fact that the company is based in the British Virgin Islands which has the best privacy laws in the world. 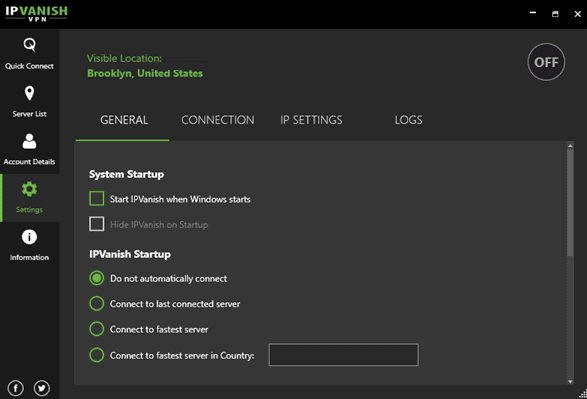 IPVanish offers almost the same protocols and security as ExpressVPN has with the addition of IKEv2 that is less secure but is definitely faster and performs perfectly well on mobile devices.

It truly is a service that is able to fight pound for pound in terms of security but not with the aspect of privacy as their no-logs policy has been proven to be a failure after they were found to be handing some records to the U.S. government – things which they claim they do not have.

VPNs are heavy bandwidth-eating applications so it is important to choose one that is able to minimize this effect.

In this aspect, we tested both VPNs in six common locations while noting latency, upload, and download speeds then we have compared the results to see which one provides better service.

ExpressVPN does really good because of the fact that it’s able to provide good speeds even for the farthest of servers.

It’s also true with the download speeds as seen on the table below:

ExpressVPN performed quite well in every test with well-maintained latencies in the servers that have been tested.

Overall, it is an efficient VPN provider even when connecting to far-away servers. They’ve got 148 server locations that are spread across the globe in 94 different countries. It even has servers in locations that can be considered unique such as Algiers or Vientiane.

In this aspect, IPVanish is able to fight head to head. There’s a bit of drop in download speed which we calculated at 20 percent but it’s able to beat ExpressVPN in most of the servers.

The download rates are really impressive while latency remained almost the same as ExpressVPN’s.

Overall, IPVanish defeats ExpressVPN on this round because of the fact that it is able to provide impressive connection speeds even for far-away servers. The server network is also larger for IPVanish but it’s not as wide as ExpressVPN’s

Both ExpressVPN and IPVanish are good VPN service providers. They have many things in common but ExpressVPN won 3 out of 5 rounds which is why it emerged victorious in the end. The fact that ExpressVPN has a flawless record in terms of privacy and security also speaks a lot on why it has won this bout!

Get started with ExpressVPN by clicking the Link below to start securely browsing the internet today!

And here’s a table to make the comparisons clearer: